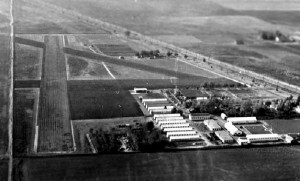 "A 1940 aerial photo looking west at the 3 unpaved runways on the south & west side of the Davis Nursery (courtesy of Dan Lang of the CDF, via Dann Shively)."

A 1940 WPA publication cites the WPA as having worked on the Davis State Forestry Airport sometime between 1935 and 1939. Although the exact date and extent of involvement is not known, the airport appears to have been built in the late 30s, so it is likely that the WPA was involved in the entire operation.

A separate source on airfields gives the following information about the airfield:

The earliest aeronautical chart depiction of the Davis airfield which has been located was on the 1939 Sacramento Sectional Chart (courtesy of Dann Shively). It depicted Davis as an auxiliary airfield.

At some point between 1939-41 the airfield was evidently renamed the State Forestry Airfield, as that is how it was listed in The Airport Directory Company's 1941 Airport Directory (courtesy of Chris Kennedy).

It was described as an auxiliary airfield, consisting of a triangular sandy loam field having 3 oiled runways, with the longest being the 2,608' east/west strip. A hangar was said to be marked with State Forestry Airport…

The State Forestry Airfield was evidently abandoned (for reasons unknown) at some point between 1962-67, as it was no longer depicted on the 1967 Sacramento Sectional Chart or the 1970 USGS topo map."