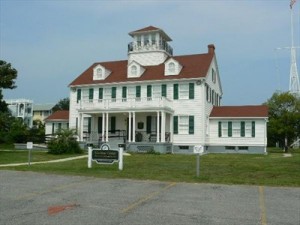 This WPA Coast Guard Station at St. Simons Island, GA was built from 1935-1937. The building is still in existence, but is now a museum rather than a USCG facility.

“In 1933, President Franklin Delano Roosevelt, as part of the Works Progress Administration (WPA), authorized the building of 45 United States Coast Guard Stations around the country. Later that same year, Georgia Senator Walter F. George, and Georgia Congressman Braswell Deen obtained an $115,000 appropriation from Congress for the new Coast Guard Station and Boathouse to be built on St. Simons Island. Work began in the fall of 1935 and of all the stations built during that time, only St. Simons and two others are believed still standing.”   (http://www.waymarking.com)