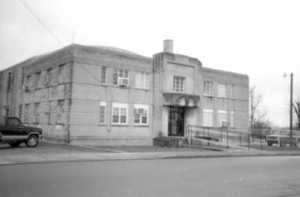 “The WPA [Works Progress Administration] armory in Springfield sits atop a hill off Main Street in downtown Springfield. This building still retains a high degree of integrity and is now owned by the city. It serves as a community recreation center and the home of the city fire, rescue and ambulance services. A DES office is also located on the second floor of the building.

“The first armory in Springfield was completed in 1941 by the Works Progress Administration… and dedicated in 1942. The armory is located at the top of a hill on Armory Hill Road which leads out of downtown Springfield. The armory is a grey, unpainted two-story poured concrete building with a second-floor drill hall and a first-floor maintenance area. The building was constructed with funds from the Kentucky Military Department Armory Corporation.

“The armory has decorative elements of the Art Deco style on its facade. The armory was used by the Kentucky Army National Guard until 1981, when a new armory was built. The former armory was given to the City of Springfield at that time, and is now used as a community center and an ambulance, fire, and emergency rescue center. Ambulances and fire trucks are now housed in what was once the maintenance garage for the armory.” (kynghistory.ky.gov.)