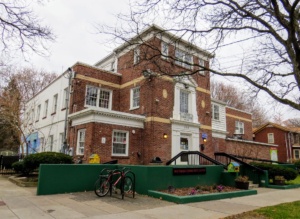 The WPA reported in 1940: “For many years the only community center [in Ithaca] was a ramshackle building. This has been replaced with a modern stone and brick structure which serves as a meeting place for the Girl and Boy Scout troops, Cultural Congress (minors), two women’s clubs, a home bureau unit, Parent-Teachers Association, Christmas club, which distributes clothing and baskets at Christmastime; Men’s forum and other organizations. The center is a fitting contribution by WPA to one of the nation’s greatest educational centers.”