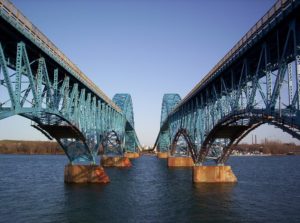 “The Swartz bill, drafted by Commissioner Robert Moses, state representative of the Reconstruction Finance Corporation, passed the Legislature in 1933. This measure paved the way for the $2,880,000 loan from the R. F. C. Robert Moses became an enthusiastic supporter of the bridge. Former Governor Alfred E. Smith gave his active support to the project, as did Speaker Joseph A. McGinnus. The ground was broken for the south bridge on October 28, 1933. At long last, in early July 1935, the bridges were completed. After more than a century of talk and discussion Grand Island was connected to the mainland of the United States, not by one, but by two bridges.”