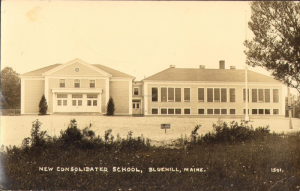 Annual town reports of 1933 and 1934 describe extensive work by Federal Agencies in repair of school facilities in this picturesque small coastal town. Until the construction of Consolidated School in 1939, most were the typical one- or two-room schools.

The town selectmen in the Warrant said:
“35 To see if the town will vote to authorize and instruct the
selectmen and treasurer to make application for and borrow from the government under the provisions of the National Industrial Recovery Act funds for the construction of the [5 room] school building proposed in Article 33.”

“SUPERINTENDENT’S REPORT
I herewith submit my annual report as superintendent of schools of Bluehill. Due to the tremendous amount of extra work involved in the C. W. A., P. W. A., and milk projects, which I have been carrying on the past few months, my contribution to this report will have to be considerably abridged.”

“C. W. A. Projects
We school officials were very much pleased to receive a generous apportionment of federal funds to be used for repairs on schoolhouses. With this money we have changed the lighting arrangement in three rooms (East Bluehill grammar. East Bluehill primary, and Eastward) so that it now conforms to State requirements. At East Bluehill the expense was nearly $800, and all it cost the town was part of the cost of the material.
At the Eastward school, in addition to improving the lighting, we shingled both sides of the schoolhouse, painted the entire interior (the walls a buff and the ceiling white) and made other minor repairs on the building, including a new inside door. The lighting and interior appearance of this building has been improved 100 per cent. Other work we have done with C. W. A. funds includes: Whitening Beech Hill ceiling, painting walls, new shelves, repairing floor, doors, etc. At South Bluehill repairs have been made, including the cutting through of a door between the two rooms.
If the work should be extended to May 1, we have other projects in mind for the improvement of the school buildings in the outlying sections”

Report of the School Superintendent
“In addition to the milk and supplies, there were two C. W. A. and one E. R. A. project. The first C. W. A. project started Dec. 1, 1933 and closed Feb. 15, 1934. The second project started Feb. 16, and closed May 1. Five men were employed. This crew remained intact for the five months. The payroll of the first project amounted to $966.75; payroll of the second, $540, making a total for wages of $1,560.75. The total amount expended for material on these two projects was $530.91, of which amount the government paid $222.44 and the town $308.47.
The grand total of wages and material on these two projects was $2,091.66. All it cost the town was $308.47, or less than fifteen per cent. It would appear that this was an excellent business proposition for the town. The E. R. A. project began the first of October and extended over a period of seven weeks ending November 22. Five men were employed.
Extensive repairs and improvements have been made on every building in town. This was made possible through an apportionment of federal funds.
At East Bluehill the windows have been changed in each, room so that the lighting arrangement now conforms to the State requirements in this respect. The building has been painted inside and outside, woodshed moved and shingled, steps repaired, new timber for reenforcement, swings repaired. $1,000 has been expended on this building, which is now in excellent condition.
At Wescott school, three new sills have been put in, the northern side clapboarded, one of the entries taken out, the__ by enlarging the schoolroom, platform removed, and building painted. The building has had very little money expended on it for years, so it was much in need of repairs.
At Beech Hill, sheet rock has been placed on walls and ceiling covered with plastering, which was constantly falling down; the old platform taken out, making more room for the piano; new shelves, fence and building painted.
At the Eastward school windows have been changed, entry taken out, porch built, building painted inside and outside, outbuildings stained, new teacher’s desk.
At South Bluehill a sliding door has been provided, whereby the two rooms may be now used as one, for socials and programs; both rooms have been painted inside, shed floor repaired and lattice work under outbuildings, chimney cleaned and doors repaired.
At the Mines school the windows have been changed, building painted outside, and other minor repairs made.
At the Village schoolhouse a new sill has been placed under the southern side, the front of the building painted two coats, a reading table made for the upstairs room, and minor repairs made.”

All of the former 29 district schools were consolidated into one building, the Consolidated School, whose construction was enabled by federal Public Work Administration (PWA) funds in 1939.

2 comments on “School Construction and Repairs – Blue Hill ME”