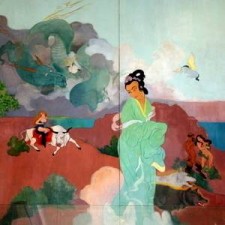 This very large mural by Stanton Macdonald-Wright “Invention and Imagination” consists of 30 panels and covers 2,000 square feet. In it’s original installation, it covered all wall space in the reading room of the previous Santa Monica Public Library at 503 Santa Monica Boulevard. It was begun under the auspices of the Public Works of Art Project (PWAP) in 1934, and completed in 1935, according to sources under the WPA’s Federal Art Project.

According to the artist’s statement:

“The subject matter may be described as depicting the two streams of human development: one technical, the other imaginative. They coalesce and fuse in what perhaps holds the greatest potentialities for art expression invented by man the medium of the moving picture. Those who have been in a moving picture stage and laboratory during the filming of a picture know what a great role the inventions along the lines of precision machinery, chemistry, and electricity, play in the process.”

In the late 60s the mural was put in storage and remained there for 40 years, until it was recently re-installed in the new Santa Monica Public Library.