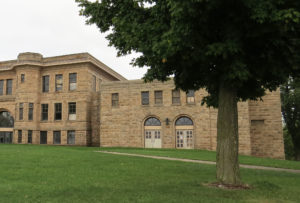 Southern part of school building, with PWA addition on the right

Sometimes mis-attributed to the Works Progress Administration (WPA), the auditorium / gymnasium addition to the Sandstone School constructed in 1936 was accomplished as a Public Works Administration (PWA) project. The PWA provided a grant of $24,966 for the project, whose total cost was $129,701.

NRHP, re the addition: “It is a two story wing with a flat roof and constructed of a similar Kettle River Sandstone. The front entrance to this section is in the form of a semi-circular arch, complementary to the two entries to the original building. This addition houses an auditorium.”

“Throughout its history, the school served as both an educational facility and a community center: these functions promoted the construction of the auditorium addition during the WPA era.”

Location notes: School is on east side of road; addition is on south side of building, just off 5th Ave.