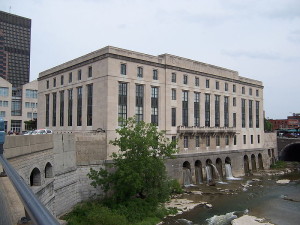 LibraryWeb.org:
“Twenty-two years after the Rochester Public Library was established, construction finally began on a central library. … The Rundel bequest, after accruing interest over the years, now amounted to about one million dollars. A PWA (Public Works Administration) federal grant of several hundred thousand dollars supplemented the Rundel fund. A site had been chosen along the Genesee River on South Avenue between Court and Broad Streets. Ground was broken in December of 1933 after all arrangements had been made. The city of Rochester would at long last have the central library it had dreamed of.

Constructed of North Carolina granite and Indiana limestone the building measures 213 by 128 feet. It has three floors, a basement and a sub-basement.”

1934 is the date noted on the building’s cornerstone.

Federal documents show that the PWA supplied a grant of $314,000 for the project. Construction was completed in 1937.