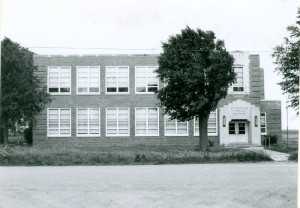 In mid July 1935, an application was filed with the PWA for aid in constructing a $45,000.00 school in Riverdale. The new building, designed by Hugh McClure of Kearney, was planned to be brick with a reinforced concrete frame. The first floor would include a combined gymnasium and auditorium measuring 48 by 66 feet. Adjacent to the gym would be two grade rooms, the home economics and Smith-Hughes laboratory and shop, and dressing rooms. The second floor was to house a science laboratory, offices, assembly hall and classroom space.

In September 1935, architect Hugh McClure was notified that final approval of a loan for the construction of the new school had been given by the PWA. A bond election was anticipated to be called soon thereafter to determine the sentiments of the public on this issue.

The project languished for a time. It was next mentioned in the Kearney Daily Hub in March 1937, and referred to as the “proposed” school building at Riverdale. In March, citizens of Riverdale went to the polls to cast their ballots on a $22,000.00 bond issue. Approved by the majority, the community could then apply for a federal grant of $18,000.00. Such a small bond issue amounted to a relatively small increase in taxation. Under the new plans for the building, the school could accommodate grades one through twelve.

Hugh McClure designed the building to be very flexible in orientation, regardless of the fact that it was constructed of brick and steel. Should classrooms need to be reconfigured in the future, the alteration could be easily done as the classrooms were built in multiples of equal “construction units,” each unit starting and ending in the center of the piers between groups of windows. One unit might serve as an office or store room, two units as a recitation room, three a standard class room, and four or more as a study lab. The architects used a similar design for a school in Oconto which was being built concurrently.

The Riverdale School was dedicated in November 1938. The building was presented to the community by contractor O. L. Clark of York, and was accepted by G. C. Stafford of the school board, and Superintendent W. C. Anderson. Architect Hugh McClure and PWA Inspector Harry Rokahr also spoke. Rokahr stated that “The government is spending a lot of money, but if anyone, after looking over this school building, can think of a better way to spend it, I wish he’d tell me.” The history of the school district was presented to those in attendance, and Miss Kate Majors, veteran Kearney teacher and former Riverdale teacher, gave reminiscences of the early days of the district. Edith Skov presented a roll call of former Riverdale teachers.

The school is still in use today.

Location notes: East side of 1st Avenue at the end of Elm Street