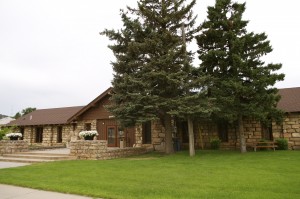 “In an effort to preserve the rich history of Rapid City and the surrounding area, WPA Project 1112 began in 1937 in an effort to construct a massive, native-stone edifice to house various collections of historical artifacts. Early in 1936, several city commissioners began to meet with architect Waldo Winter to discuss the construction of a local museum. Talks came to a standstill when Winter vehemently opposed locating the museum in Halley Park, purchased by the city from several individuals in 1916 and 1917, as the intended location of a future museum. Negotiations resumed in late 1936 when George Mansfield, president of the local historical society and R. L. Bronson, secretary of the chamber of commerce, convinced the architect that the museum should be built in Halley Park. Employing local craftsmen and artisans, construction began in the fall of 1937 and was completed by early spring of 1938. Citizens of the area turned out on a Sunday afternoon for the dedication held on May 2 and to meet the first resident curator, John A. Anderson. Anderson was a pioneer Government-licensed Indian trader who had lived on the Rosebud Indian Reservation for forty-two years and it was his extensive compilation of Native American artifacts that the museum revolved its collection around. Over 65 ceremonial and peace pipes, beaded apparel, war clubs, flutes, and a buckskin shirt adorned with 50 scalps were moved from the laundry room of the Rapid City Indian School to the new museum, as well as the eagle-feather war bonnet of Chief Yellow Horn Bear worn at the inauguration of President Theodore Roosevelt.

The Rapid City Historical Museum is an excellent example of the vernacular rustic style, influenced by the Adirondack fashion and characterized by the use of logs, indigenous stone, shingled roofs, broad overhangs, and exposed rafters. The museum was built of native Minnelusa limestone and required 1,278 tones of rock, 2,000 bags of cement, 6,714 pounds of steel, 2 carloads of Douglas fir, and 65,000 pine shakes. The roof was bridged and trussed with massive timbers that required no support except the walls, giving the museum the distinction of having the largest floor space without ceiling support in the state of South Dakota. Relief carvings of both an Indian and a pioneer giving welcome signs were added to the front doors by the artist El Comancho, who worked with both Remington and Russell. The cost of the building came in at $30,000, with WPA funding covering two-thirds of those expenses. After completion, the museum was under the sponsorship of the United States Indian Arts and Crafts Board, the Department of Interior, and the city of Rapid City. A west wing was added to the structure in 1957, constituting the only change to the original building. The museums extensive collection of artifacts was eventually moved to the Journey Museum and the Higher Education Office currently occupies the facility at 515 West Boulevard.”

Note: the building is actually now occupied by the Parks and Recreation department.