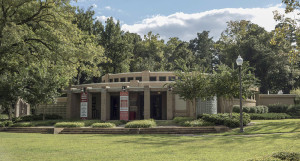 The federal Works Progress Administration (WPA) provided funding and labor for construction of what was then known as the Queen City Pool and Pool House at Queen City Park in Tuscaloosa, Alabama. The WPA supplied $100,000 of the $125,000 total cost of the construction project. The facility now serves as the Mildred Westervelt Warner Transportation Museum.

Wikipedia:
“Designed by Frank Lloyd Wright’s apprentice Don Buel Schuyler, the Queen City Pool served the citizens of Tuscaloosa from 1943 through it closure in 1989. It was constructed as a … Works Project Administration relief project of the Great Depression. The site features a poured concrete bathhouse, a wading pool and an art deco fountain. The former swimming pool was filled in with dirt in June 2005.”

Project originally submitted by Evan Kalish on May 24, 2015.