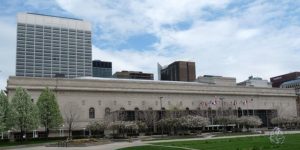 600 Works Progress Administration (WPA) workers undertook a $300,000 reconditioning project for the Public Auditorium in Cleveland, Ohio, in advance of the 1936 Republican National Convention. The WPA was concerned with “permanent improvements” to the facility.