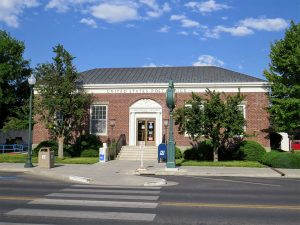 The historic post office in Yerington was constructed in 1938 and is listed on the National Register of Historic Places. The building, which houses an example of New Deal artwork, is still in service.

The Yerington Main Post Office is significant on the state level for art and on the local level for architecture and politics/government. An unaltered example of a small-town post office and federal office building, the building’s design, based on standardized plans, is typical of a number of other small town post offices constructed in Nevada, the West, and the nation during the Depression era. The Post Office and the mural it contains represent the efforts of the federal government, through its public works and art programs, to assist communities during a period of economic emergency.”