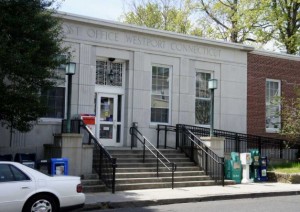 The former post office in Westport, Connecticut, located at 154 Post Road, was built in 1935 with federal Treasury Department funds.  “It was designed by Lansing Holden, a World War I flying ace, who won the Distinguished Service Cross.  Returning home from the war, he took up his father’s profession as an architect.  Holden continued to fly, and in 1938 he died in a crash trying to land in bad weather.”

In 2011 the post office was sold to a private real estate company. The building then housed a high-end restaurant, though it has changed hands again.