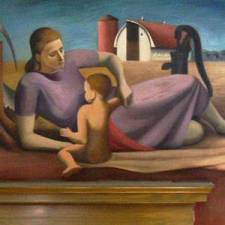 Seymour Fogel painted this oil on canvas mural, entitled “People of the Soil,” in 1940 with funds provided by the Treasury Section of Fine Arts. It is viewable in the Cambridge post office lobby.

“People of the Soil” is “a Regionalist work in both its subject matter and its perspective. The mural, which depicts a family of Minnesota agriculturalists, does not aim to achieve a journalistic fidelity to reality. Instead, it presents us with the kind of rural idyll we often see in Grant Wood’s paintings; it presents us with an idealized view of rural life in 1930s Minnesota.

“In this piece, we should pay attention to what is left unstated or unrepresented, rather than try to tease symbolism out of what Fogel has chosen to show us. As Kathleen McCarney points out in her ‘Art for a People: An Iconographic and Cultural Study of Mural Painting in Minnesota’s New Deal Art Programs,’ in ‘Fogel’s “People of the Soil,” the farm scene is idyllic, showing a peaceful scene of a farm family at work. There is no stress in the calm scene, or any indication of the years of drought and poor agricultural prices that farms experienced throughout the state in the 1930s. The animals on the left indicate a certain degree of prosperity, as do the farm buildings in good repair.’ Fogel, like the other Regionalist artists, could disregard reality when it conflicted with his notion of what rural life was supposed to look like. For him, a life in the fields was also a life uncomplicated by unemployment, undernourishment and overwork.” (russelltetherfineart)