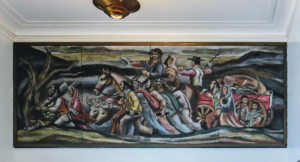 The historic Bangor post office houses an example of New Deal artwork: “Slate Belt People,” a mural commissioned by the Section of Fine Arts. Completed in 1941, the work was created by Barbara Crawford. The work is distinctive in that it is painted on four slate panels.

According to an information page on site:

Commissioned in July of 1940, this mural is one of approximately one thousand murals that were installed in post offices by the Treasury Department’s Section of Fine Arts between 1934 and 1943. Unlike Great Depression programs such as WPA, these murals were not intended as relief and were often awarded to artists based upon their entrance in a sponsored competition. Artists were encouraged to travel to the town that received the mural and choose a subject that portrayed the history, industry or a local point of significance in the community.

Barbara Crawford received the commission for the Bangor mural based upon her sketches submitted for a national competition. After traveling to Bangor and learning the local history, she decided that the mural should be painted on slate. It is the only Section of Fine Arts mural that was painted on this medium.

For her subject, Crawford chose to paint the people that settled the slate belt over the years. To the left [in] the mural she depicted the Scotch Irish who established Hunters Settlement in 1728 and opened the land to further immigration. Next came the Welsh slate dressers who are depicted with hammers and wedges in the center of the mural. The Welsh established a town in the area known as Uttsville and named it Bangor in memory of their own slate town in North Wales. It was the Welsh who turned this region into the greatest slate producing site in the world. Above the five Welsh figures is Robert Morris Jones on horseback with his wife. Jones came from Wales in 1846 and discovered many of the slate quarries throughout the region. He worked to have Bangor incorporated as a borough and served twice as its chief burgess and twice on the borough council. The last group depicted to the right [in] the mural are the Italian immigrants. They emigrated from the Balkan states and Italy in the early 1900s and settled next to Bangor, creating the borough of Roseto.

The four slabs of slate were supplied to Barbara Crawford by D. Stoddard and Sons. In total they measure five feet by fourteen feet. Ms. Crawford painted the panels at her studio in Philadelphia until July of 1941. Upon completion of her work, she had great difficulty finding someone who would transport it back to Bangor for installation. Crawford was paid $1,000 for this mural. From that amount she also paid all her travel expenses, art supplies, transportation costs and installation costs.

Other [nearby] Section of Fine Arts murals are located in the Nazareth, Catasauqua and Allentown post offices. 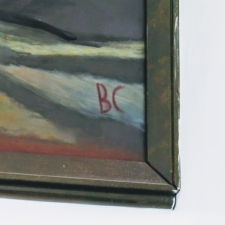