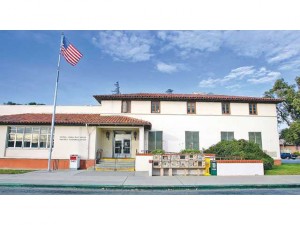 This New Deal post office was built in 1939, and the cornerstone was filled with all sorts of historical mementos:

“Mantecas first and only from the ground up post office was built at North Maple Avenue and Center Street. The Mediterranean-style building cost $80,000.

The dedication ceremonies attended by 1,000 people took place on March 25, 1939. Dignitaries speaking predicted the building would accommodate Mantecas needs for a hundred years before any additions would-be needed.

The cornerstone put in place nearly 72 years ago included:

an autographed photo of President Franklin D. Roosevelt.
an autographed photo of Postmaster General James A. Farley
an autographed photo of Congressman Frank H. Buck.
a miniature handmade bottle with a handmade label from the Schenley Distilleries Inc. of Manteca with instructions to present it to the president in office when the cornerstone is opened.
45 un-cancelled United States Commemorative stamps from John A. Mendosa to be given to his most needy descendant.
a copy of a 35-year-old edition of the Stockton Independent that was presented by E.E. Salmon.
the Manteca Bulletin dated March 23, 1939.
the complete enrollment of Manteca Grammar Schools signed by 420 students.
the enrollment of the Manteca Luncheon club.
a number of financial statements and rosters of various Manteca firms including Bank of Manteca, Manteca Canning Company, Kraft-Phoenix Cheese Co., South San Joaquin Irrigation District.
an Air Mail Week film and a number of postal forms used in 1939.

Former Postmaster Joseph Wilson handled all of the paperwork needed for the government to acquire the site.

When Wilson passed away in August of 1939, the land just west of the post office was made into a memorial park and named in his honor.

The post office survived just over one generation not 100 years before expansion was necessary. In 1966, the post office moved into temporary quarters on North Main Street to add 7,000 square feet plus a 3,000-suqare-foot basement. The dedication in November of 1967 attracted 400 people.”