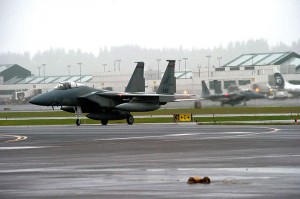 “The base is the home of the 142d Fighter Wing, Oregon Air National Guard. The 142d FW participates around the globe supporting drug interdiction, USAFE air defense, as well as contingency operations such as Operations Noble Eagle, Enduring Freedom, and Iraqi Freedom. To complete these missions, four groups are assigned to the 142nd Fighter Wing: 142nd Maintenance Group, 142nd Operations Group, 142nd Mission Support Group and the 142nd Medical Group…

The base’s history begins in 1936 when Works Progress Administration (WPA) funding allowed the City of Portland to purchase 700 acres of land along the Columbia River and bordering the Columbia Slough for a “Super Airport.”, to replace an earlier [facility] established in 1926.