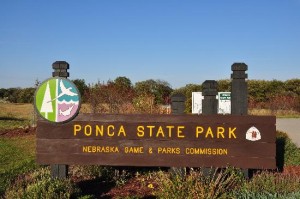 The CCC conducted extensive work at Ponca State Park. From the University of Nebraska-Lincoln “Virtual Nebraska” database: “Over the years the Missouri River moved at will. Eventually the town was no longer “a port.” In 1934 the American Legion raised money to purchase 220 acres along the river for a park. Over 2,000 people attended the dedication. The CCC (Civilian Conservation Corps) built roads, buildings, two shelter houses, and transplanted 5,400 shrubs and trees. In the years that followed cabins were built and electric lights installed. The ferry boat, docked at the Bigley ravine, made regular trips across the river to South Dakota, carrying cars both ways. A pool was added in 1956 in honor of Ponca’s centennial. Ponca State Park, now over 900 acres and ranking with the best in the nation, continues to expand.”

According to the Nebraska State Historical Society, “In 1934 the Civilian Conservation Corps began the development of the original 220-acre site of Ponca State Park on the banks of the Missouri River. This park has become one of Nebraska’s finest outdoor recreation areas.”

From the Nebraska Game and Parks Commission: “Ponca State Park along the Missouri River in Dixon County was created with the donation of 200 acres from area residents and developed almost entirely with federal funds through the CCC.”