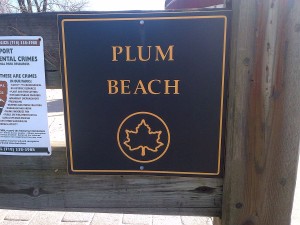 Plumb Beach (sometimes spelled “Plum”) is a beach along the north shore of Rockaway Inlet, across the creek from Marine Park. It was originally an island, but Hog Creek was filled in during the late 1930s. The beach area was extensively developed by the WPA. At the time, the Island was part of Marine Park.

An August 1941 Department of Parks press release announced the “completion of the development of Plum Island, Marine Park, Brooklyn. This new recreation area provides a small parking field just off the Belt Parkway, 50 picnic tables and 40 fireplaces, serviced by a concession building, comfort station, and approximately 1000 feet of boardwalk. The area can be reached by automobile from the Belt Parkway just east of Sheepshead Bay. It is also accessible from the Belt Parkway pedestrian and bicycle paths. The area is designed primarily for picnicking and is the only picnic ground in a New York City park located on a sand beach. The concession consists of a counter for cafeteria service; the concessionaire will handle the usual line of ice cream, soft drinks, sandwiches candy and cigarettes, and will also sell charcoal for use in the fireplaces…

The construction of…these new developments was performed by the Work Projects Administration from plans prepared by the Department of Parks.”

Since 1972 Plumb Island has been a part of Gateway National Recreation Area and is no longer part of Marine Park.