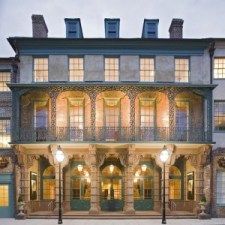 The historic Dock Street Theater, known as America’s First Theater, in Charleston, South Carolina, was the subject of a massive Federal Emergency Relief Administration (FERA) and Works Project Administration (WPA) renovation project between 1935 and 1937. The structure was designed by the local architecture firm Simons & Lapham.

CharlestonStage.com:
After the Civil War, the Planter’s Hotel fell into disrepair and was slated for demolition. But in 1935, after Milton Pearlstine made the property available to the City of Charleston and at the urging of Mayor Burnet Maybank and other notable citizens, the original building became a Depression Era WPA (Works Progress Administration) project. At that time, the present theatre was constructed within the shell of the Planter’s Hotel. The hotel’s grand foyer became the grand foyer of the theatre and the hotel’s dining room now serves as the box office lobby. The beautiful woodwork and mantels of the second floor drawing room were salvaged from the Radcliffe-King Mansion (circa 1799) which stood at the corner of George and Meeting Streets and was razed to build the College of Charleston gymnasium, another WPA project. Modeled on eighteenth century London playhouses by Charleston architect Albert Simons, the present Dock Street Theatre’s new stage house and auditorium were built in the hotel’s courtyard. The local carpenters who were put to work as a part of this Depression era relief effort utilized locally grown and milled native black cypress for the beautiful warm wooden interior. Following this $350,000 renovation, The Historic Dock Street Theatre’s second grand opening took place on November 26, 1937. Notables in the audience included author DuBose Heyward (Porgy) who was named writer-in-residence.

J. I. Hayes writes that the theater renovation continued to benefit the community after construction was complete, serving as “a powerful stimulus to the performing arts in Charleston for several years thereafter.”

Edited excerpt from Blevins (2001) “Documentation of the Architecture of Samuel Lapham and the Firm of Simons & Lapham”:

Although it was often discussed, it was not until the 1930s that recreating a theater in the building became a reality. In February 1935, Harry Hopkins, Administer of the Works Progress Administration (WPA), announced the effort to restore the Dock Street Theatre in the former Planter’s Hotel building. Charleston was one of the first cities to receive Federal Emergency Relief Administration (FERA) money, and this was the first project in the city to utilize it. Douglass Ellington was the architectural consultant with Simons & Lapham selected as local architects in change.

The Dock Street Theater project required some unusual reinforcing techniques that involved strengthening the building, but not removing or rebuilding walls. Little was done to the exterior beyond repointing, brickwork, window sash replacements, and general repairs. Internally, the building was rebuilt and adaptively restored. During this process, elements that were significant or potentially significant were saved for reuse in the project. The goal was to use as many of the building’s original materials as possible. Where original material could not be reused then copies of the feature were made. Also in some instances period pieces were used. An example of this was the incorporation of door architraves, woodwork, plaster work, and mantels from the Radcliffe-King House (ca. 1802, destroyed October 1937 for the College of Charleston Gym) which were utilized in the Dock Street Theater’s Drawing Room, Lobby, and Green Room.

The plan of the project is to renovate the old Planter’s Hotel on the exterior as the 19th-century hotel, with the interior being renovated/restored to the 18th-century Dock Street Theater.

In the courtyard of the building old cobblestones replaced the original renovation idea of concrete squares. The cobbles were brought as ship ballast from the Palisades on the New Jersey side of the Hudson River. The City of Charleston stopped using them for paving the streets and sidewalks. With the material available the architects had them installed in the project rather than the original plan for a concrete patio which enhanced the restoration. Also installed in the courtyard were statues from the recently demolished Academy of Music (located on King at Market Streets and the present site of the Rivera Theater). A later famous Charleston artist, William Hasley, who had recently graduated from the Boston Museum School, painted duplicate frescos from designs from the Academy of Music in the method of Renaissance artists Inigo Jones and Hogarth. He incorporated the same methods into scenery for the reopening play of the theater, The Recruiting Officer. The Recruiting Officer was the first play performed in the original Dock Street Theater and was used again to reopen the theater on 26 November 1937.

The stage for the theater is modern (by 1930s standards) with a 36’ wide proscenium that is 35’ deep—making it the second largest stage in 1930s Charleston. The stage floor is equipped with trap doors for stage tricks. It has been made as fireproof as possible with a cement foundation under the stage and an asbestos curtain to separate the audience and stage areas. The curtain has fusible lengths to melt at a specified air temperature to drop the curtain. The project cost $350,000. The theater is still in active use at the time of the survey.