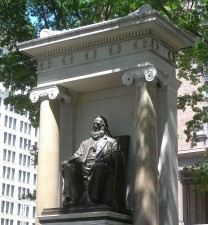 Formerly known as Stuyvesant Square, the park in which this statue sits was renamed Cooper Square after Peter Cooper, a 19th century industrialist and philanthropist. As the NYC Parks site documents:

“Following Cooper’s death in 1883, Augustus Saint-Gaudens (1848–1907), the preeminent 19th century sculptor and one of the earliest alumni of Cooper Union (class of 1864), was commissioned to design a monument in honor of the great visionary. Saint-Gaudens collaborated with the renowned architect Stanford White (1853–1906) who created the piece’s marble and granite canopy…

In 1935, coinciding with reconstruction of the park, the newly created Parks Monuments Crew, with funding from the federal Works Progress Administration, performed extensive repairs and cleaned the monument. The monument was again restored in 1987 under the Adopt-a-Monument Program, a joint project of the Municipal Art Society, the Art Commission, and Parks.”

The restoration of this and many other monuments around the city was led by Karl Gruppe, “chief sculptor of the Monument Restoration Project of the New York City Parks Department, from 1934 to 1937.” The program was initially supported by federal funding from the Public Works of Art Project (Lowrey, 2008), and later by the WPA.