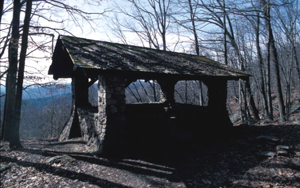 The WPA and the CCC worked in Ozark National Forest, including building Lake Wedington and the surrounding recreation area and three natural stone cabins on White Rock Mountain.

“The seventy contributing resources that comprise the Gray Spring Recreation Area/Forest Service Road #1003 Historic District (Ozark-St. Francis National Forest) were constructed in 1934-35 by the enrollees of the 748th Company of the Civilian Conservation Corps (CCC), Arkansas District, working out of their camp at Cass, Arkansas (located approximately five miles to the east of this district).  The Cass camp – established for the purpose of providing manpower for projects within the central ranger districts of what was then the Ozark National Forest – was a typical CCC camp in that it sheltered approximately 200 enrollees who worked out of the Cass camp itself and at least three known side camps (side camps were composed of small units of enrollees who were assigned to a temporary campsite away from the main camp for the purpose of completing a specific project located too far from the main camp for a daily commute).  Forest Service Road #1003 had previously been nothing more than a rough trail through this section of the Ozark Mountains connecting the communities of Cass to the east and Bidville to the north and west that was impassable for vehicular traffic.  The improvement of this trail into a planned, graded vehicular roadway intended for use year-round – complete with the necessary drainage culverts and a bridge, as well as its associated picnic area – was one of the earliest recorded projects undertaken by the enrollees from this CCC camp.

As both a road improvement and recreation facility constr[u]cted by the CCC it represents a property type associated with the historic context Facilities Constructed by the Civilian Conservation Corps in Arkansas, 1933-1942.  These resources were constructed within this remote, forested area for the purpose of providing both vehicular access to heretofore inaccessible sections of the forest and developed recreational facilities for the purpose of encouraging tourism.  As such, the Gray Spring Recreation Area/Forest Service Road #1003 Historic District remains locally significant under Criterion A through its associations with the contributions to American social history made by the Civilian Conservation Corps and its associations with the emphasis upon conservation and enjoyment of our natural resources that was the original mandate of the CCC.  It is also significant under Criterion C, firstly by virtue of Forest Road #1003’s status as a good and intact example of an original CCC rural road building project that, because of its location on the slope of a mountain, incorporated a variety of drainage structures in its construction, and secondly by virtue of the associated picnic area’s buildings and structures being representative examples of the Rustic style of architecture favored by the CCC throughout the state.”