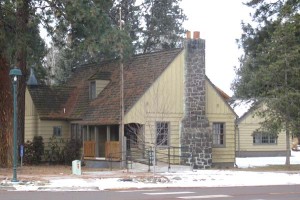 This former Department of Forestry building was purchased by a private owner to preserve and live in after it was vacated by the DoF in 2011. From the Nugget Newspaper:

“County records show that the residence was built in 1938. What is still unclear is who built the building. One former resident had heard that a private construction company from Salem built the structure; not the Civilian Conservation [Corps], who built many of the department buildings throughout the state.

However, Bill Willitts found the CCC marker cut into the siding of the building in one of the rooms, showing that there was some CCC participation from CCC Camp Sisters. That finding and the general appearance of the structure makes CCC involvement likely. Further research is being done by the department’s Forest History Center in Salem. A warehouse was constructed in 1939 and a gas house in 1956.”