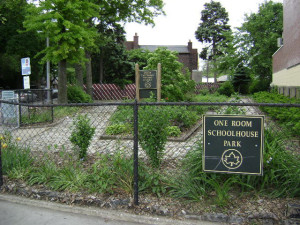 The NYC Parks website explains that the park’s name comes from the fact that “Queens’ last one-room schoolhouse occupied this site from the time of its construction in 1879 until its demolition to make room for a public park in 1934.”

As researcher Frank da Cruz explains here, almost all New York City Parks Department projects between 1934 and 1943 were accomplished with New Deal funds and/or labor; from April 1935 on, the WPA became the main source of this support.

The park is still going strong, but the current status of the playground is unknown. NYC Parks explains: “Subsequent decades saw the playground transformed into a sitting area that was popular with patrons of the public library once located across the street.  When the library moved in the 1970s so did many of the park’s regular visitors.  Rejuvenation of the park as a garden has been accomplished through a partnership between Parks and the Jackson Heights Neighborhood Association (formed in 1982).”