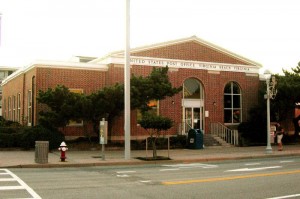 This building was demolished in 2009. A Walgreens now stands in this location.

The former Atlantic Station post office was originally constructed as Virginia Beach’s Main Post Office in 1937. A Section of Fine Arts mural by artist John H.R. Pickett was installed in the post office in 1939.

Unfortunately, the building was razed in 2009 after being purchased by Walgreens. The re-development of the property took place despite opposition by local officials, businesses and other citizens.

‘Walgreens has purchased that building,’ said Mac Rawls, chairman of the city’s Historic Preservation Commission. ‘They are scheduled to tear it down – they’ve already applied for demolition permits.’

‘We have absolutely no leverage as a city, over what they can do,’ Rawls added. ‘And that’s a shame. We’d really like a chance to discuss adaptive reuse of that building.’

Robert Elfinger, a spokesperson for Walgreens, said the national drugstore chain has already considered reusing the building but decided it wouldn’t work…

In July, the Atlantic Station had the mural removed before the local post office closed. The painting has since been restored and will likely be sent to another Virginia Beach post office.” 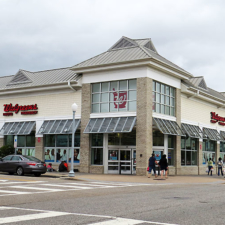 The old Virginia Beach post office was razed to make way for this Walgreens.