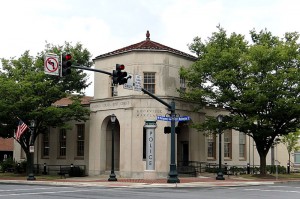 Constructed by the Treasury Department and PWA in 1938, and now used as a city police station.

“By the mid-1930s, Rockville’s population was about 1,500, County government had erected the Grey Courthouse, and across the street arose a stately bank in the Art Deco style.  It was time for Rockville to have a permanent post office.

The Federal Government paid $35,000 for the lot on the corner of Montgomery and Washington Streets, then demolished the small frame buildings that had housed the Sentinel newspaper since 1855.  Construction began in November 1938 and cost $42,000. Rockville celebrated the dedication of the Post Office on July 22, 1939.  Following a parade watched by 3,000 people, a bevy of speeches, and a reception for special guests at Glenview farm.

Rockville’s post office was one of 406 constructed under the Public Works Administration (PWA).  Despite the desire to complete projects rapidly, PWA stressed the importance of high quality to ensure “public works of an enduring character and lasting benefit.”..

The interior of Rockville’s Post Office is beautiful as well as functional.  Fifteen foot ceilings look down on terrazzo floors and walls, the original bulletin boards and postal boxes, bronze grilles, and a handsome mural.  Most striking is the mural of Sugarloaf Mountain by Judson Smith, which was sponsored by the Treasury Department’s Fine Arts Section with funds based on one percent of the total construction cost…

The old Post Office was designated as a Rockville Historic District in 1979 and listed in the National Register of Historic Places in 1986.  In addition to being a charming vestige of Rockville’s old main streetscape lost to urban renewal redevelopment, the 1939 post office was well used for 67 years and beloved by its many patrons in Town Center.  It closed for post office business at 4:30 pm on October 27, 2006, and immediately moved into GSA’s surplusing process.

In 2008, GSA transferred the property to the City at no charge with the condition that it would be used for homeland security and public safety purposes.  Three years later, the renovation of the historic building and construction of a new annex for use as the police headquarters for the City began and was completed in 2012.  On October 20, the Mayor and Council of Rockville dedicated the new police station and Rockville’s “old” Post Office starts a new life.”   (https://www.peerlessrockville.org) 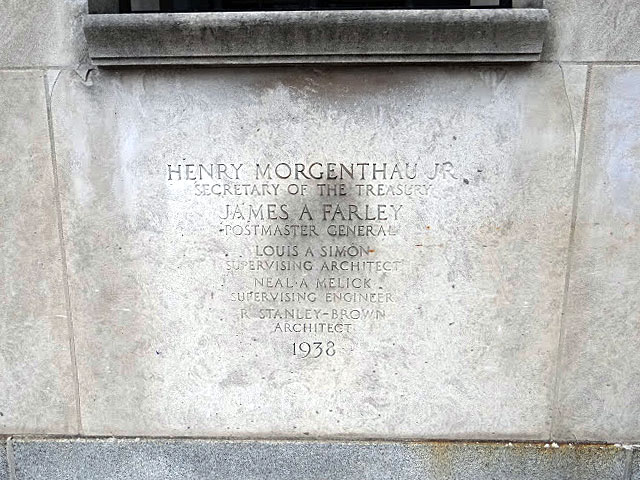