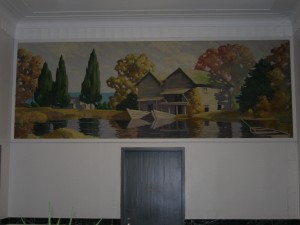 Section of Fine Arts mural entitled “Early Industry of Dale County” painted in 1938 by Kelly J. Fitzpatrick. Still hangs in the old post office building, now used as the County Board of Education.

“The Ozark panel was the first of two murals painted by Wetumpka artist John Kelly Fitzpatrick, with Phenix City the second. Fitzpatrick was awarded the commission on the basis of work he had done under TRAP, an earlier Treasury program. He actually proposed several different themes, including a scene from local history depicting a famous battle between Samuel Dale and local native Americans, a decorative and allegorical panel, and a postal history panel. The Section however wanted him to try a local industry theme. They suggested as a model the easel painting of a mill that he had previously produced under PWAP, and which was then hanging in the White House. That sketch was ultimately approved and used. When the mural was installed a notice in the local paper complimented it highly.”