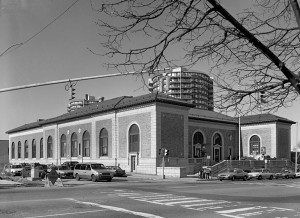 Stamford’s main post office (which was later renamed the Atlantic Street Station post office) was constructed 1916-1917 and was a unique design. Additional improvements were made with federal funding in the 1930s. The building was listed on the National Register of Historic Places (NRHP) in 1985 and has since been sold to private developers.

The NRHP nomination explains:
“A major addition was constructed in 1939, to the rear, doubling the size of the facility and providing additional work space. The rear structure is sympathetic in detailing and only slightly less elaborate in exterior ornamentation. At the same time, the lobby was altered with the addition of bronze vestibules, relocation of original lock boxes to a new box lobby extension, and addition of more service counters.”