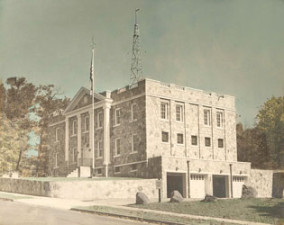 “The town department first had an office in the Springdale fire house and later was at the Springdale Rolling Mills. The guard at the Rolling Mills took messages from downtown for the officers and alerted them of a message by lighting a light out near the corner of Hope and Rolling Place. In 1941, the department head quarter was located on Haig Ave., where a two-story stone building was completed by the WPA. The town police department was equipped with a 3-way radio system and a 24-hour patrol was maintained throughout the territory outside city limits. In 1949 The Town Police Department became part of the City Police Department with the consolidation of town and city.”