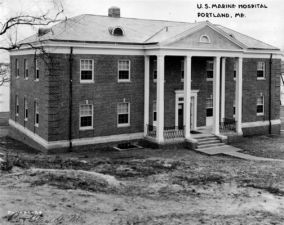 From Joseph Conforti’s Creating Portland: “The Public Works Administration constructed a number of staff residences and dormitories on the campus of the existing Maritime Commission hospital, which was completed in 1859.”

From Joseph Conforti’s Creating Portland: “The Public Works Administration funded the construction of buildings for federal, state, and local  government… Other projects in Portland included a number of staff residences and dormitories at the U.S. Maritime Commission Hospital at Martin’s Point” (2007, p. 278).

From the National Register of Historic Places nomination form, 1974: “Portland’s Marine Hospital is a rare surviving example of a series of such buildings erected during the 1850’s from designs by Ammi B. Young, Supervising Architect of the U.S. Treasury Department. Constructed of brick with granite trim, this Italian style Marine Hospital may be the only one in the nation to retain its original exterior Italianate iron work.”

The facility was transformed into a private health care provider in 1981.