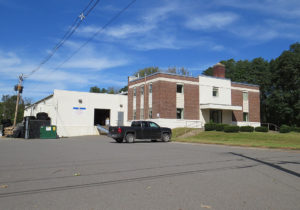 The former Tunkhannock Armory, which one article identifies as being on West Street*, was constructed with the aid of federal Public Works Administration (PWA) funds. The PWA provided a $28,392 grant for the project, whose total cost was $84,956. Construction occurred between Dec. 1937 and Jul. 1938.

*Wyoming County Press Examiner: “Arrangements have been completed for groundbreaking ceremonies of the new Tunkhannock Armory on West Street.”

Living New Deal believes the old armory to be the privately-owned structure at 55 West Street (see photo); the site is consistent with the following description of the property (PA.us):