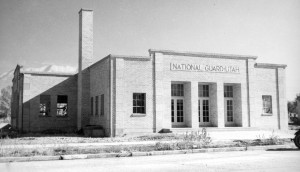 “During the 1930s, UTNG used federal money, often supplied through the Works Progress Administration (WPA), to build or expand a number of UTNG facilities. The WPA funded eight armories and several garage and storage areas for the UTNG. By 1940, 13 armories were in use by the Utah Guard including” that in Spanish Fork. The historic armory in Spanish Fork has since been demolished.