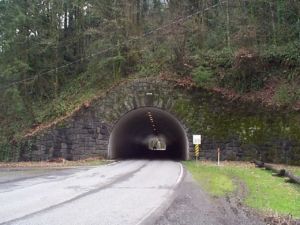 In 1940 and 1941 respectively, Works Progress Administration (WPA) workers constructed two tunnels approximately a quarter mile apart from one another to improve vehicular movement through Portland’s Forest Park in the city’s west hills. As with the Rocky Butte tunnel, local basalt was used to face the arched tunnels and adjacent retaining walls. The tunnels themselves are concrete and allow a travel lane in each direction and sidewalks for pedestrians on either side. The dates of completion are inscribed above the entrances.

At the beginning of the 1930s, approximately eighty percent of Portland’s residential growth had taken place on the city’s Eastside. Downtown business interests called for improvements to roadways through Portland’s West Hills to address the perceived imbalance and to open residential development opportunities on the city’s northwest side. NW Cornell and NW Barnes Roads would facilitate such development if sections of the roads that were “too steep and torturous for heavy traffic” were improved with tunnel construction.
Late in the decade, WPA funds supported these improvement for both roadways, including cutting bores through rock and the construction of fine masonry portals. NW Cornell Road Tunnel 1, the eastern most of the two tunnels constructed on NW Cornell, exhibits the concrete/stonework portal work associated with the National Park Service Rustic masonry portals style. This 500 foot long tunnel was opened in 1940.
Basalt, mined at Portland Rocky Butte, provided the material for the portal work. Raffale (Ralph) Curcio, an Italian immigrant known for his excellent workmanship on a number of Portland area projects (e.g. Columbia River Highway, Vista House), supervised the WPA stonemasons. 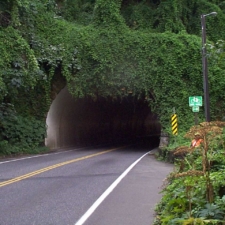