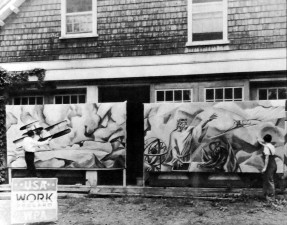 Two twelve-by-six-foot murals were painted by Mr. and Mrs. William Herbert Holston for the Newark Terminal (Administration Building) of 1935 under the auspices of the Federal Art Project (FAP) of the Works Progress Administration (WPA).

The murals, shown in a contemporary WPA photograph, have been lost or destroyed.

The first mural depicts Leonardo da Vinci gazing into space with his left hand raised, attempting to solve the mystery of flight. Seated at a table to his left is his student, Astro, head bowed, wearing useless wings.

Both murals combine abstract and realistic styles of paintings. Backgrounds are done in broad, jagged, intersecting planes. Foregrounds, however, are in realistic style.

Arshile Gorky also painted canvas murals for Newark Airport’s original Terminal Building. Unfortunately, eight of those have been lost and only two remain, “Aerial Map” and “Mechanics of Flying. ” Discovered under several layers of paint in 1973, they now reside at the Newark Museum.  They are discussed on a separate project page here.