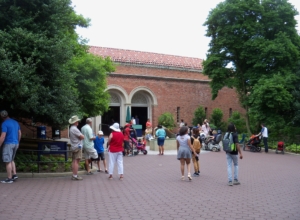 New Deal agencies built or improved virtually every aspect of the zoo.  The PWA paid for a new elephant house and small mammal house and an addition to the bird house.  It funded a mechanical & carpenter shop building to supply wood and iron work for the zoo and a vehicle garage, as well as new boilers for the heating plant and addition steam pipes to exhibit houses.  Electric lines were put underground. The PWA also paid for a restaurant building to serve visitors to the zoo.

The buildings were all designed in 1935 by Edwin Hill Clark, lead architect for all the New Deal additions to the National Zoo, as well as the Philadelphia zoo in 1930s.  The work was supervised by the Treasury Department Procurement Division’s architectural office.  The actual construction was undertaken by private contractors.

Several artworks were commissioned by the New Deal’s Treasury art programs to enliven the exhibit halls, restaurant and grounds.

The Public Works Administration (PWA) contributed at least $983,000 (about $18 million in 2018 dollars).  The zoo’s 1937 annual report declared, in regard to PWA funding, that: “The fiscal year 1937 was probably the most outstanding in the history of the Zoo.”

In 1936, zoo Director William Mann commented: “The Zoo has benefited a great deal from the work accomplished by the Works Progress Administration. There is no part of the park that hasn’t received some definite improvement. Some of these things have been needed for years. The Government property is in much better condition than ever before, which will be reflected in lower maintenance costs in the future than if the work had not been done” (quoted in Work 1936)

With the exception of the stone garage, all of the PWA-funded buildings are still in use as of 2019.  Most of the relief work is still there, too, though much of it is invisible. Many of the artworks survive, too, though some are in need of restoration.  Regrettably, managers do not seem terribly interested in the New Deal legacy at the zoo.

The details on various New Deal accomplishments at the National Zoo are provided on the additional zoo pages, linked on the right. 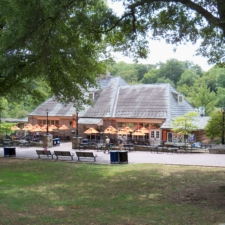 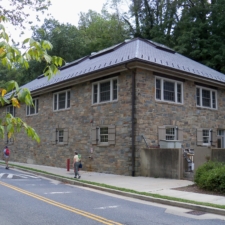 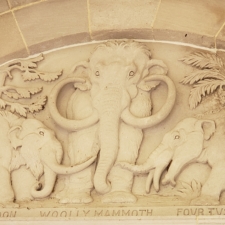 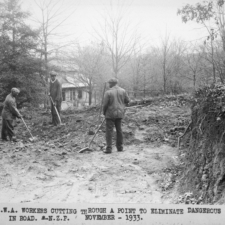 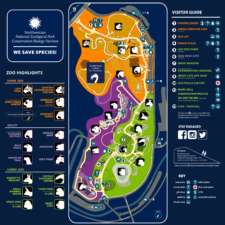