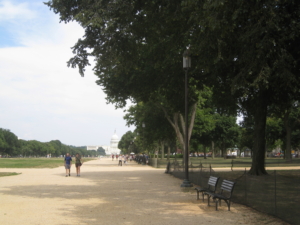 The New Deal carried out a major renovation of the National Mall, the green centerpiece of Washington DC.

Funding was provided by the Public Works Administration (PWA) and labor power by the Works Progress Administration (WPA). As of 1939, the PWA had expended $1,050,000 on the reconstruction work.  As one newspaper put it, “…the mile long park connecting the Capitol with Washington Monument and Lincoln Memorial probably would still be in an early stage of development but for the allocation of PWA funds to finish the project.”

Work began in 1934 under the supervision of the Superintendent of the National Capital Parks, which had become a branch of the National Park Service when the park system was taken over by the Interior Department under Harold Ickes in August 1933.

Landscaping was central to the whole project.  An enormous lawn, 1 mile long by 300 feet wide, was laid down the center of the Mall. Wide footpaths were created along the edges of the lawns, parallel to the roadways.

Formal rows of trees were planted along the roads, paths and borders of the Mall, chiefly American elms. Despite the ravages of Dutch Elm disease, many of the original elms survive.  (Cornell 2017, USA Today 2019)

In addition, seventy large Old English Boxwoods were planted about the Grant Memorial, averaging 8 feet in height.  A sprinkler system and water supply in the outer portions of the Mall was also installed.

Malcolm Kirkpatrick was the Landscape Architect in charge of the project. 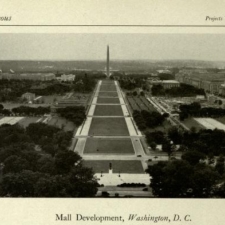 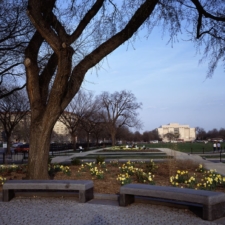 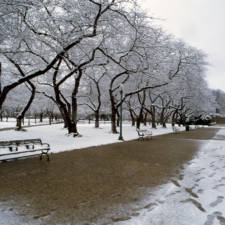