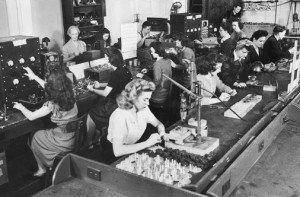 Originally called the National Bureau of Standards, this a measurement standards laboratory, which is a non-regulatory agency of the United States Department of Commerce. The name was changed in 1988. (It is also sometimes known as the National Metrological Institute (NMI)).

In 1938-40, the Works Progress Administration (WPA) did extensive work on the facilities.  WPA relief labor was employed around the Bureau of Standards site to:

The Washington Post reported in 1941 that these improvements were underway (Washington Post, August 3, 1941).  It also reported that the WPA had constructed a high voltage laboratory for $500,000, using a mix of federal and private funds, yet that type of major funding was more typical of the Public Works Administration (PWA), not the WPA – a common mistake made by the press at the time.

The photo above depicts Bureau of Standards employees at work at the facility, perhaps in the improved buildings themselves.