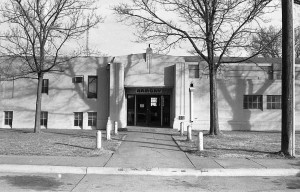 An economic account of Kearney is given in The Kearney Daily Hub paper of November 19, 1935, reporting facts disclosed at a joint Buffalo County Board and Kearney City Council meeting. Board Chairperson Martin Slattery reported that “There were nearly five thousand persons on relief in Buffalo County last year, practically as many as the combined populations of Ravenna, Shelton, Gibbon, Elm Creek, and all other towns in the county outside Kearney.” Chairman of the County Board’s poor committee, Gene Loomis reported that there were then “about 150 non-employable cases on relief, as well as about 175 employable but jobless cases. The number of unemployed was expected to rise to about 300 in the near future, he said, unless jobs are found soon.” The local paper on November 5, 1935 reported the Works Progress Administration (WPA) Program, at least for Buffalo County, was “still in future tense.” There were WPA projects on the horizon for Kearney and Buffalo County. One of the several projects was building an armory for the National Guard.

First mention of the new Armory is reported in The Daily Hub in April of 1935. Major Guy N. Henninger of the National Guard spoke to the Kearney City Council and indicated that federal funds had been allocated for the construction of more than a dozen National Guard armories throughout the state. Kearney had been selected as a city that would benefit from a new armory, if the city would donate the land for the building. The council was sufficiently anxious to accommodate this opportunity and began discussing locations for the armory immediately. Application was made to the federal government, including the offer of six lots, or one half block, adjacent to the County Courthouse. The offer was accepted.

According to public records filed with the Buffalo County Register of Deeds, in 1929 the City of Kearney acquired the property upon which the building sits for $226. The site is located on the north side of 16th Street, between Central Avenue and 1st Avenue north of the Buffalo County Courthouse, in Kearney, Nebraska. The City purchased it at a Sheriff’s sale in a tax foreclosure proceeding. Buffalo County was attempting to collect unpaid taxes and the property was sold for nonpayment of taxes. The property sat void of activity until late 1935. The property remained in City ownership until the City deeded the property for the price of $1.00 to the State of Nebraska in a deed dated February 15, 1937, and later filed with the Register of Deeds on April 8, 1937.

Construction of the Armory took place in three phases. Construction was done by the Works Progress Administration (WPA) with a standard plan provided by the military. Because the Kearney National Guard unit had up until this time been a wagon company, there was no need for a garage. However, Major Henninger had been informed that it would be transitioning into a motorized unit at some point in the following six months. Although their project did not have the funding to add a garage for the new trucks, it was expected that an addition could be made to the property for this purpose. By October 1935, the wagon company had confirmation of becoming a motor transportation unit, and was planning on having to house as many as eighteen trucks. In mid-November, The Daily Hub reported that construction of the new facility, the east portion, was about to begin. The WPA was to furnish labor and the United States Procurement Office would furnish all materials for the building. Materials were expected to arrive the following Monday. The original plans called for a brick building. This was changed because at the time there were very few brick masons left on relief rolls due to the new brick construction of local schools. The building was to be of reinforced concrete. E.F. Adams, of the Nebraska State Planning Board for WPA, noted that this type of construction would be equally attractive as brick. He illustrated his ideas of the proposed building by pointing to California’s architects’ experiments with concrete, resulting in some of the most beautiful buildings in southern California. Adams estimated the project would employ about twenty-five to thirty people for a period of six to seven months. The Armory would cost an approximate $25,000 to build.

Work did begin on the following Monday as reported previously by Adams. Excavation was by hand labor, for it employed more unskilled labor. The west portion of the 1936 building was excavated so that a basement could be built. Additionally all footings for the main structure were also dug by hand labor. The original structure was reported to be “an ‘L’ shaped structure, providing a large indoor drill hall, as well as a rifle range, officers’ quarters, storage rooms, and vaults, kitchen facilities, and other conveniences.” Garage facilities were to be built later. The local commander W.J. Atkinson predicted the local Guardsmen would be provided with a fleet of new motor trucks “before the state camp next summer.” It was noted by The Daily Hub that Holdrege’s unit was already mechanized and Kearney was in line for motor truck equipment in the very near future. In December, The Daily Hub reported that the first cement was being mixed for foundations. Work was planned to proceed as long as they had enough lumber for the construction of forms. The pouring was held up a few days because the project awaited the shipment of reinforcing steel. A week later, The Daily Hub reported the workmen started pouring the walls. Delays were also caused because of poor weather, and construction was forced to stop until February.

By April, the foundations had all been poured, a boiler installed in the basement, and the poured concrete walls were approaching the second floor on the west side of the building. Plans called for the floor in the drill room to be poured concrete subflooring with a hardwood floor above. By the end of August, the walls were all finished, and the construction of the roof had begun. The structural steel members for the trusses were already on site, and it appeared the roof would be enclosed before winter. Within a month, the roof was also completed, as was the wiring and plumbing. After a few more weeks, the subfloor for the drill room had been poured, and ceilings had been covered with plywood and insulation board for reducing noise and heating. The hardwood floor would consist of matched wood blocks set vertically to give a thickness of two and a half inches. Major W.J. Atkinson stated that the floor “ought to last at least a hundred years.” Unfortunately he was mistaken. According to the owners, the floor was stricken by termites within a decade of its installation, and the floor was replaced with terrazzo.

At the end of the year, National Guardsmen were able to move their equipment into the new armory. The National Guardsmen planned to formally open the building to the public with a “Golden Gloves Amateur Boxing Tournament” at the end of January, followed by a ball celebrating President Roosevelt’s birthday soon after. The boxing tournament included fifty amateur boxers, all vying for the championship titles. The main drill hall was set up with three boxing rings, and ample seating for 800. The tournament was extremely well attended. Just days later, the drill room was reconfigured for the dance. Chairs were cleared away, and David Haun’s band was hired to provide the music. The funds raised from the dance were donated to Roosevelt’s favorite philanthropy, aid to “crippled” children. Seventy percent of the money raised at this dance was earmarked to help local children.

The 1936 building is made of poured in place formed concrete. It has a wooden arched roof with wooden hand constructed trusses. It has a basement to the west of the drill room originally contained lockers and showers, a coal bin, and steam boiler for heating the Armory with radiators. The upstairs contained administrative offices and a gun safe. On the ground level to the south of the drill room in the southeast corner of the Armory was a kitchen. Darryl Fisher, a former local guardsman with about 20 years in the military who also did heating work throughout in the building, reported that this was the area of the original kitchen. There is no evidence of floor drains or plumbing; he stated that much of the plumbing and heat was run above the concrete floor. An indoor shooting range was west of the kitchen and south of the drill room.

A second WPA structure was added to the west of the 1936 Armory. It too was built by the Works Progress Administration and is known as the 1938 garage. Although the building has a “USA 1938 WPA” seal, the building was approved by the federal government in late December 1938, and construction occurred in 1939. It was a garage built for working on military machinery and for storage of military equipment. It was constructed of masonry concrete block with concrete pilasters. Exterior windows and a garage door still exist in the center portion of the 1938 building. The 1938 building had wooden roof trusses built on site. This WPA masonry does not have the finishing of professional-grade masonry work. The exterior and interior walls of this portion of the building reflect either the unskilled labor working on the building or the lack of building materials available. The Daily Hub indicated that the building of the garage was held up due to a lack of materials, and that they were waiting for buildings to be torn down in Kearney in order to make use of their materials.

The construction of the garage was not as well publicized in the local paper as the armory had been, so there are few articles describing the process the builders were making aside from lack of building materials. Nevertheless, the garage was ready for dedication on Armistice Day, November 11, 1939. Prior to the ceremony, the high school band led a parade from 25th Street to the armory, and twelve National Guard trucks representing the motorized units of Kearney and Lexington followed the guard color bearers. There was a gun salute, as well as the playing of “Taps.” Presentation of the building was made by WPA engineer Jesse Spray to a representative of the National Guard. Major W. E. Hose of the medical detachment accepted the building on behalf of the National Guard. Architects McClure and Walker were also on hand to observe the transfer of their garage building to the National Guard.