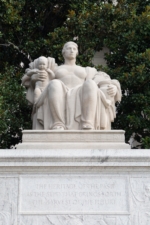 The exterior of the National Archives is graced by sculptures, bas-reliefs and inscriptions. The building above ground was completed under the New Deal by the Treasury Department Office of Procurement, including the sculptures.

Congress originally approved a new home for the National Archives in 1928, but construction did not start until late 1931. The foundation was laid and the cornerstone placed by President Herbert Hoover during his last weeks in office. Construction above ground began under President Franklin Roosevelt in 1933 and the exterior was completed in late 1935; an addition with more stacks was finished in 1937.

The architect of the building was John Russell Pope and the style is Neoclassical, with towering columns on each side. It appears that the sculptural elements were part of the original conception, but there various reports in the newspapers and versions from the National Archives are vague about who commissioned the sculptures and how they were paid for.

In all likelihood, the artists and designs were chosen by Pope, working in conjunction with the Commission on Fine Arts (CFA), and paid out of the general construction budget provided by the Treasury Department.  There is no record that the Treasury Section on Fine Arts was involved and the CFA did not have a budget sufficient to pay for artworks – its role was to approve or veto public art and architecture in the District of Columbia.

The four massive sculptures at the entrances of the National Archives are of special note. They are 10-foot high, allegorial figures standing on 15-foot pedestals, all carved from Indiana limestone in 1934-35.

On the Pennsylvania Avenue side areFuture and Past, carved by San Francisco sculptor Robert Aitken, assisted by Attilio Piccirilli. Aitken is best known for the West Pediment of the Supreme Court building.

On the Constitution Avenue side stand Heritage and Guardianship, carved by James Earle Fraser, assisted by sculptors David Rubins and Sidney Waugh and carver G. A. Ratti.

Additional sculptures in the pediments depict figures representing destiny, history, guardianship, and inspiration, and there are inscriptions on the pediment, as well.

There are also bas-relief medallions on the building depicting the Great Seal of the United States and emblems of the House, Senate, and government departments – symbols of the records that are housed in the building.  These 8-f0ot diameter medallions were designed by James Earle Fraser, Robert Ingersoll Aitken & Ulysses Ricci.  Bas-relief eagles are also by the trio of Fraser, Aitken and Ricci.

Inspirational inscriptions encircle the top of the building on three sides:

The glory and romance of our history are here preserved in the chronicles of those who conceived and builded the structure of our nation.

The ties that bind the lives of our people in one indissoluble union are perpetuated in the archives of our government and to their custody this building is dedicated. 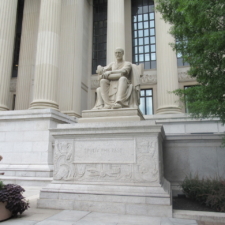 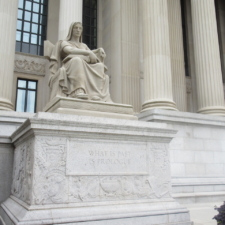 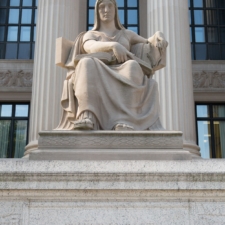 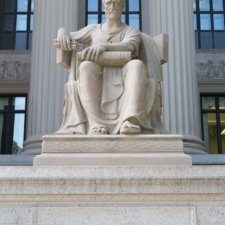 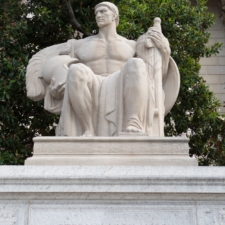 Project originally submitted by Richard A Walker on December 16, 2019.