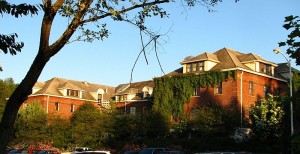 Picture of the 1911 facilities.

“The Multnomah County Poor Farm in Troutdale was built in 1911 to replace Multnomah County’s first home for the destitute, the Hillside Farm in Portland’s West Hills. The latter institution, which housed the poor, ill, and disabled, was inspected in the fall of 1910 by a coalition of members from Portland charitable organizations who declared the crumbling building and its deplorable conditions to be disgraceful.

That spurred Multnomah County Commissioners to hasten work on a progressive new institution at Troutdale intended to help the poor become self-sufficient through farming. This “back to the land” concept in social welfare was based on the belief that the poor could enjoy fresh air and country living while growing their own food.”   (http://www.oregonencyclopedia.org)

“The former county poor farm is listed on the National Register of Historic Places. Today the site is operated as an entertainment and lodging complex under the name McMenamins Edgefield,”   (wikipedia)