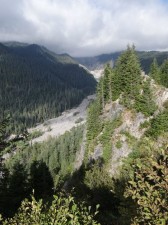 NPS.gov:
“The Civilian Conservation Corps was busily building and repairing park lands and structures from 1933 to 1941. In addition to landscape work, they helped plant over 10,000,000 trout in the lakes and streams.”

“Five Emergency Conservation Work Camps are authorized for the park. They are manned by newly recruited Civilian Conservation Corps (CCC) men from various parts of the United States. Training is provided by park service personnel. The CCC use inexpensive skills to build and repair structures, campgrounds, roads and trails.”