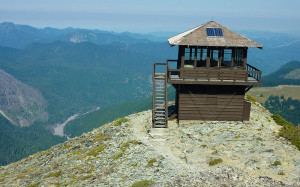 Wikipedia:
“One of four fire lookouts remaining in the park, the lookout is used for visitor services during summer weekends. The building is about 14 by 14 feet, and was designed by the National Park Service Branch of Plans and designs under the supervision of Acting Chief Architect Edwin A. Nickel.”