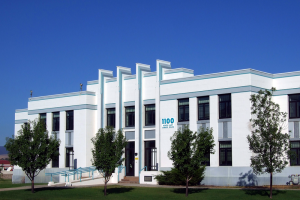 In 1885, the Montana Territorial Legislature authorized the organization of a National Guard. Within three years its nine companies were headquartered in the territorial capital at Helena. Since that time Montana Guard personnel have been called up for State Active Duty to assist with riots, strikes, natural disasters, law enforcement, search and rescue, and other emergencies. Montana citizen soldiers mustered into federal service for military actions including the Spanish American War in 1898, the Philippine Insurrection in 1899, World War I France, throughout World War II’s Pacific Theatre, the Korean and Vietnam conflicts, the Persian Gulf War, Bosnia and Kuwait, and for Homeland Security Operations following the September 11, 2001, terrorist attacks. After earthquakes destroyed the old 1890s armory, Helena architect Norman DeKay designed this handsome facility of poured concrete and steel. Completed in 1942 with Works Progress Administration (WPA) labor, its clean lines and squared pilasters in a stepped motif are classic Art Moderne style elements. The interior included garage space for 70 trucks, U.S. Army supplies storage areas, a rifle range, and a 73-by-102-foot drill hall. The unique drill hall floor was constructed of hand-laid two-by-fours set on end 18 inches deep in a contrasting design so that vehicles could be driven on its surface. Since World War II, the drill hall has served as a community social center, dance hall, and sports facility. In December 2001, the Montana National Guard headquarters relocated from this site, but the landmark building continues to be a bold reminder of the Montana National Guard’s contributions both at home and abroad.