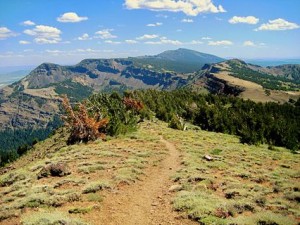 “President Franklin D. Roosevelt’s Civilian Conservation Corps (CCC) provided a work force, which pushed the Modoc Forest development work years ahead. A special camp was built at Hackamore in 1933 and maintained there almost until the abandonment of the Corps in 1942. Spike camps from this main camp were established when necessary but the gentle nature of the Modoc terrain allowed workers from the main camp to reach out much further than in the average forest area…

…By the end of 1933 there were some thirty sizeable CWA crews working out from their homes on Modoc Forest projects. A large number of these workers were farmers and small stockmen…

Funds for NIRA work were allotted direct to the Forest Service, which allowed full control of crews and their location in camps close to work projects. Some good development work was accomplished by these crews, particularly on road and public campground construction.

The evolution of the Works Progress Administration from the different work relief agencies created a separate organization but its ERA branch resulted in a small number of workers being turned bodily over to the Forest Service. By assigning and training two or three employees for each job to conform to the WPA regulation work periods, the Modoc Forest got considerable help through the medium of ERA. These employees supplemented CCC crews in fire suppression work, or were employed in sub-clerical positions and in construction and maintenance on easily accessible projects. The Modoc had a maximum allotment of 360 man-months of this type of labor during the year 1935. In December 1936 there was a total of 28 ERA employees working, and 15 a year later. The Modoc also furnished employment for 7 NYA youth during the period of existence of that relief agency.”