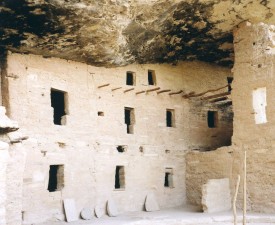 Mesa Verde National Park was signed into existence by Teddy Roosevelt in 1906. Its goal is “to protect some of the best-preserved cliff dwellings in the world.” Occupying roughly 80 square miles in southwestern Colorado, the park features “numerous ruins of homes and villages built by the Ancient Pueblo peoples, sometimes called the Anasazi. There are over 4,000 archaeological sites and over 600 cliff dwellings of the Pueblo people at the site.” (Wikipedia)

During the New Deal period, the Civilian Conservation Corps (CCC) conducted extensive work throughout the park.

“The contributions of the Civilian Conservation Corps (CCC) to the Historic Landmark were also significant, as the CCC built and remodeled many of the buildings in the Administrative District [of Mesa Verde] during the CCC era of 1933 to 1942… The CCC alterations replicate the workmanship and materials of the original properties. The stone used in the building construction and remodeling was quarried by the CCC enrollees.” (http://www.nationalparktravel.com) 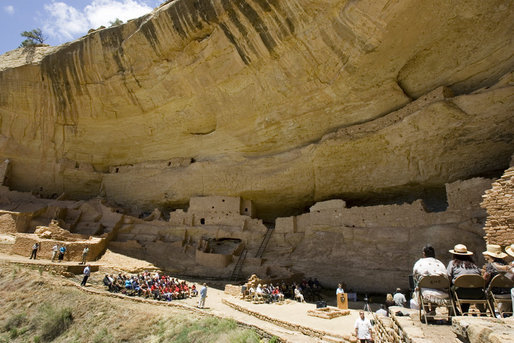