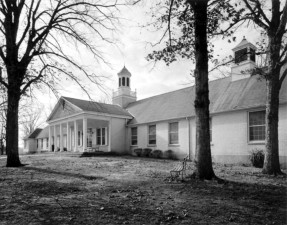 The Works Progress Administration (W.P.A.) greatly contributed to the expansion of what was then known as the McRae Memorial Tuberculosis Sanitarium [for Negroes].

“On January 1, 1930 the McRae Sanatorium for Negroes opened with 26 patients. Within a matter of days, the waiting list numbered in the hundreds. Dr. Browne, his family, the entire staff, and all the patients lived in one large building. Finally, in 1935 Dr. Browne secured funding from the Federal Works Progress Administration to build a new multipurpose structure at the sanatorium. The building, which was named for Miss Erle Chambers, contained a modern surgical unit, dining facilities, and craft areas.”

In more recent times it was known as the Alexander Human Development Center. The current purpose of the campus is unknown to Living New Deal.

One comment on “McRae Sanatorium for Negroes (former) – Alexander AR”