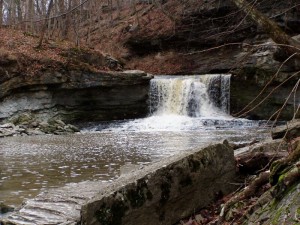 McCormick’s Creek State Park received the first Civilian Conservation Corps (CCC) Camp in Indiana. The 589th CCC company was active from December of 1933 to July of 1935. After the CCC laborers were relocated in 1935, WPA laborers arrived and continued to build improvements for the park. In 1940 a handful of CCC laborers returned to the camp. The CCC and WPA laborers contributed to a wide range of projects. The New Deal agencies helped create trails, shelters, a bridge, telephone wires, an amphitheater, dams, clearings for campgrounds, cabins, and more. To enhance the outdoors experience projects exhibited designs that were rustic and harmonious with their surroundings, using native materials.