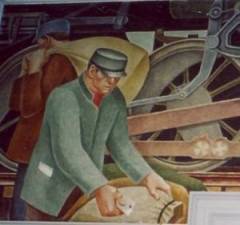 Daniel Rhodes painted this egg tempera mural on plaster in 1939 for the Treasury Section of Fine Arts. It was originally installed in the post office and was restored in 2008.

Iowa-born artist Daniel Rhodes painted a number of murals for the federal government during the Great Depression. “Communication by Mail,” depicting modern railroad technology, was his last Iowa mural commission. It is one of only three true fresco murals in Iowa.

From an article in the Marion Times:

The former Marion Post Office on 8th Avenue, was built with WPA funds in 1939. A mural, by Fort Dodge resident, Dan Rhodes, was completed on its walls that same year. The 12 foot by four foot painting was one of only two out of the forty post office murals in the state to be painted directly on the plaster of the wall.

Rhodes mixed a combination of eggs, oils, and pigment called “tempera” to provide a neutral background highlighted by brighter, contrasting colors in the foreground. The scene portrays the wheels of a locomotive as the train stops to deliver and pick up mail. At one end, a mail bag is being retrieved from the conductor, at the other, is a citizen quickly placing a letter in the rail station mailbox.

“Communication by Mail is a fine work of Federal Treasury art,” said [historian David] Wendell. “It continues the theme shown in the ornamental cartouches carved above the doors at the entrance to the old post office.”

…Marion’s former post office is also unique in that it has served two other purposes and its mural removed. The painting remained untouched when the building was adapted to become Marion’s City Hall at the time of America’s bicentennial. In 2006, however, the facility was perceived as too small for the rapidly growing community, and acquired by Merchants National Bank. City Hall moved two blocks away to 6th Avenue, but the mural did not move with it. Because the paint was applied directly onto the plaster, removal was impractical.

“It would require the wall itself be taken down,” said Wendell.

The Marion Historical Society then launched a campaign to pick it up and transport the wall to the Heritage Center on 10th Street. Led by former Mayor, Vic Klopfenstein, $45,000 was raised and restoration artist, Tony Rajer, of Madison, Wisconsin, supervised as the wall was cut into a 4,000 pound block of masonry and paint. Rajer then added pigment to touch up sections of the mural where paint had flaked off or was damaged and the beautiful fresco was unveiled for public display at the Heritage Center.” (https://www.mariontoday.org)